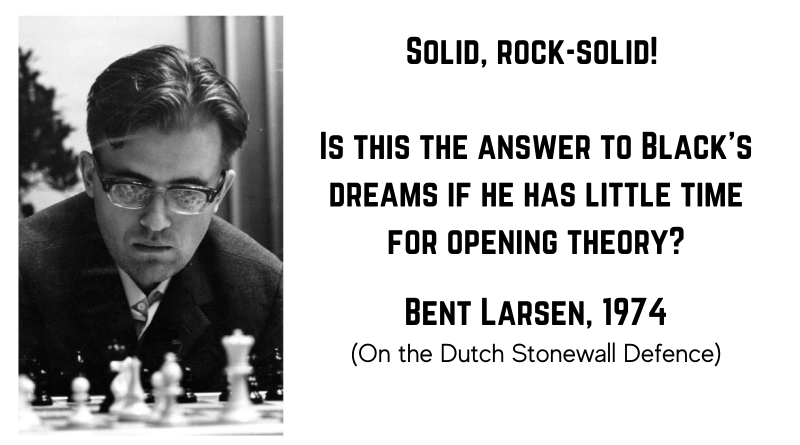 “Not a Dutch surely? That would be fine by me! … So it is a Dutch Defence. One of the openings which, just like most masters, I am very happy to play on the white side.” – Tigran Petrosian (commenting on his game against Bent Larsen, San Antonio 1973 (1-0, 63).

The late, great former world champion was not a fan of the Dutch Defence, as the above quote shows.

In contrast, his opponent in this game, Bent Larsen, wrote in 1974:

“Solid, rock-solid. Is this [the Stonewall Dutch] the answer to Black’s dreams if he has little time for opening theory? For some players, it may be, though it is a little discomforting that most experts think White has a small but clear positional advantage… Though some may call it primitive it is a fine solution to many of Black’s problems. But some difficulties remain. First of all, the Stonewall is not so good if White does not fianchetto his f1-bishop! It is very much against this bishop that Black’s strategy is directed. So if White is not a fianchetto man you are probably wise to have another system ready. (Not all Stonewall fans will agree.)” – Bent Larsen, 1974.

Nearly fifty years later, the author of this book, GM Nikola Sedlak, sides with Larsen and not Petrosian, and he provides a black repertoire on the Stonewall. He writes about the position after 1.d4 e6 2.c4 f5 3.g3 Nf6 4.Bg2 d5:

“From a purely aesthetic standpoint, Black’s position does not make the greatest first impression! Black seems to have gifted his opponent an outpost on e5, while also blocking the c8-bishop behind its own pawns. The justification for these concessions can be found in the space Black has gained, the solidity of his set-up (there’s a reason why the opening was named the Stonewall!), and his ability to develop actively with …Bd6 and …0-0, with various attacking and other dynamic possibilities available in the middlegame. Finally, setting up a rock-solid barrier to oppose the bishop on g2 is a great boon. In fact, I always like to wait for White to play g2-g3 before l commit to a Stonewall set-up. When White avoids doing so, I recommend choosing a different set-up, as detailed in Chapter 1.”

Sedlak is in complete agreement with Larsen!

Moreover, because of Sedlak’s commitment to a Stonewall only against g2-g3, he prefers the move order 1.d4 e6 and only later …f5. Of course, this allows White to enter a French Defence with 2.e4 d5. Some players may not have the French in their repertoire, and so Sedlak provides a chapter on 1.d4 f5. This move order allows a number of aggressive systems by White, including the Staunton Gambit (2.e4), 2.h3, 2.Bg5, and 2.Qd3. Some of the resulting positions are surprisingly sharp, and players will need to be well-prepared to meet them. Sedlak provides sensible options against all these systems.

Finally, Sedlak looks at move order issues and options against 1.c4 and 1.Nf3 to round off the theoretical discussion. The book ends with a series of exercises to test the reader’s knowledge of the material.

It’s clear from this overview that Sedlak has put a lot of thought into designing this repertoire, which is perhaps not surprising given that he plays the Dutch himself. There is a very good balance between analytical variations, computer recommendations, and verbal explanations. The theory is also complemented by a good range of annotated games. Although Sedlak obviously champions the black side of the Dutch, he is honest with his views on White’s options. The book also contains a lot of new recommendations for the reader to try.

This example is a good illustration of the informative annotations used by Sedlak to explain the typical plans in the Stonewall. The author continues to annotate the rest of the game in the book, and he won in 51 moves.

In summary, Sedlak has written an excellent repertoire on the Stonewall Dutch. The combination of detailed explanations and analysis makes this a very good choice for both long-term Dutch players and those looking to take up the Dutch for the first time. 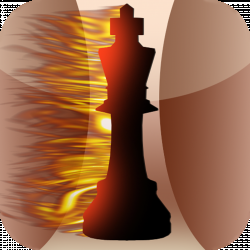 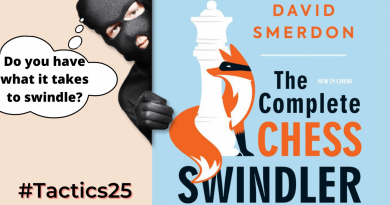 Will You Resign in this Position? 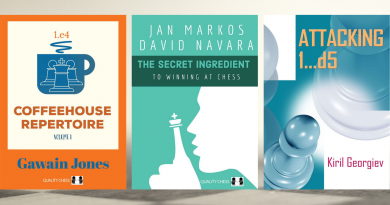 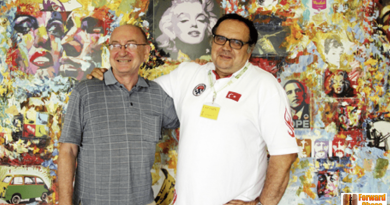